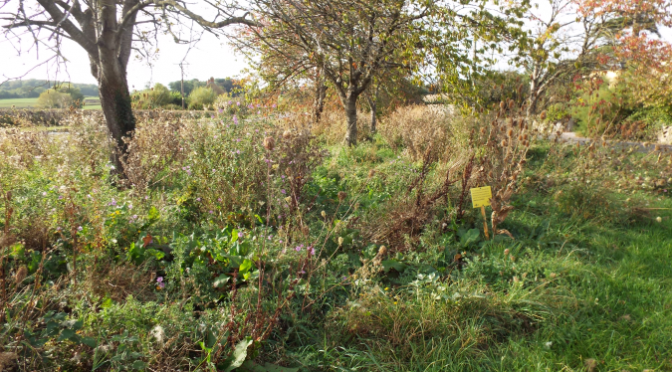 This is the second year into the project. In Summer 2013 the meadow was a sea of dominant white from wild camomile. Forty seven other species were counted but were not obvious. Autumn came and the meadow looked untidy whilst the flower seeds were allowed to mature. The meadow was cut and eventually cleared. Daffodil, Anemone and bluebell bulbs were purchased and planted.

After Christmas 2013 a raffle was held at the Village Hall Coffee Morning. Due to the generosity of everyone it was a very successful morning. Seeds were subsequently purchased. Early this year snowdrops and wild daffodils appeared closely followed by the bluebells.

In February snowdrops were planted in the green ready for Spring 2015. Many compliments were received over the year. One or two comments expressed the untidiness of the area and would rather have it reverted to grass. It is hoped that this is not the general opinion.

Throughout the spring and into early summer the meadow grew steadily. Pink campion came out early and created a sea of pink but unlike the preceding year the species intermingled……..white campion, thistle, vetch, wild carrot, corn marigold, poppy, corn cockle, flax, camomile, cornflower and many other species. In March wild poppy seeds were sown as a result of a request to remember the First World War Centenary. Very few came up. Perhaps they will next year.

During the Summer a path was cut through the meadow in the hope that people might walk through and look at the flowers close up. We will do the same next Summer.

Throughout this Summer the meadow has been largely left to its own devices and it is hoped that the result has been pleasing for many. There are still monies in the account to buy bulbs which will be planted soon.

The meadow will be cut down shortly and after leaving it for a few days for the seeds to fall to the earth the debris will be cleared.
From January onwards a new season will begin the cycle all over again. Next Summer will bring an even greater variety of wild grasses and flowers. It is hoped that everyone in the village and those who see it in passing will enjoy the display and know that it attracts pollinating insects, butterflies, bees, birds and any animals which shelter there.

It is hoped that this small meadow area can continue to grow for many years to come. So that this can succeed volunteers are desperately needed. If anyone of any age with any skills….not just gardening…..could help then please ring the secretary John Bailey on…01278 652540.