Find out more about the interesting and colourful characters who live in our parish by reading these profiles the first of which is (Peggy Valentine) written by the late John Bailey.  New profiles will be added below as they are appear.

Do you know your knots?

No?  And I’m not sure I do either. If ever you go walking at Natural England’s reserve at Bridgwater Bay, you’ll see them at this time of year – thousands of them.  Actually, I think they are dunlin and not knots, but I couldn’t resist the pun.  They fly to and fro like huge shoals of fish running from the barracuda, their under bodies shimmering in the light as they turn and change formation.  The dunlin is a small wading bird which feeds at the top of the retreating tide.  When you walk there you will see tens of thousands of their tiny footprints where they have been going for the seemingly endless supply of minute crustaceans and worms which we never see.  For reasons best known to itself, the dunlin nests in the high arctic and visits us to enjoy a temperate winter.

This is also the time of year when the shelduck arrive.  They look like a cross between geese and ducks, and Bridgwater bay is one of their prime wintering sites in this country, because our muddy sands contain their main food source.

At any time you may see an egret there, or a peregrine waiting on a tussock for some action.  Curlew, redshank, lark, stonechat and turnstone abound and the precious wheatear.  In summer you may hear the ringed plover chicks going for cheep adventure travel along the pebbles as they learn to fly.  These birds nest where the pebble banks are being kept in check with the new growth of horned poppy, sea spinach and Herb Robert.

If you are very lucky, you may see a buzzard-sized marsh harrier and the short-eared owl, quietly patrolling the levels for unwary voles and other vertebrates.

I wonder, as we disappear up to Ikea at the weekend, to spend money yet unearned, or visit a wildlife centre so that the kids may know something about our habitat, why we rarely go to places like Bridgwater Bay.  That is where we may truly start to learn about the life around us and it’s only a few minutes away.

But we have to be careful.  As a species, we do not own these places or these creatures, in the Old Testament sense.  They were not created for our benefit, but have evolved and we should knock on their door before entering.  We are strangers and it is not possible to go there without realising that.

We will not have our nature lecture pre-digested at Bridgwater Bay and there are no full cages or press-button displays to help us.

Hooray – I’ve managed to write all this without using the words “environment” or “respect”. 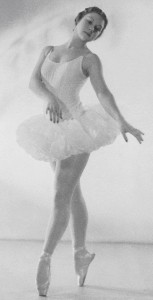 Do you know who this beautiful dancer is?  Has she any connection with Combwich, do you think?  Answer came there YES.  This is a great picture of a most interesting person in the world of ballet and she has lived in Combwich/Otterhampton  for nearly thirty years and before that, in Shurton.  Her stage name was Margaret Currie, but you may know her as Peggy Valentine and she has lived quietly in Otterhampton for many years.  Peggy met her husband Louis when they were both in a review show.  Sadly, Louis died in 1983.

And the sad thing for us is that Peggy is at last on the move again – to Clevedon and it will be nice to remember the pleasure she has given us by her company in recent years.   Peggy knew many of the dancers from the Diaghilev Ballet Russe, not forgetting the later heroes Michael Somes, Frederick Ashton, Beryl Grey, Robert Helpmann and the formidable Ninette de Valois, who scared many dancers in her most important career, including the writer’s wife.

Peggy tells me that her top heroine was Margot Fonteyn – not because she was the most athletic of dancers.  She could never have acquired the much more gymnastic quality of modern dance, but because she had infinite grace and her ‘line’ was perfect.

In later years, when she had finished with the London Ballet and had danced in so many reviews, Peggy became a ballet examiner and travelled all over the world.  Combwich must seem a quiet place after all that, don’t you think?         JB  (September 2013) 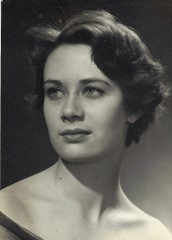 Well known Combwich resident and regular Friday Morning Coffee Clubber Louise Bailey was born into a musical family. Her grandfather was Arnold Dolmetsch, a French/Swiss born pioneer and instrument maker who moved to London in the 1880s. Louise, a fluent French speaker was surrounded by musical members of her family as she was growing up and played the viol amongst other instruments, but her first love was dancing. (
Her ballet dancing earned her a full-time place at the Saddlers Wells Dance School at the age of 12 and at 17 went on to join the Saddlers Wells Theatre.
Louise performed with the Old Vic Company and toured America with Moira Shearer, a red haired ballerina, and Robert Helpman, famous dancer. He was also the Child Catcher in Chitty Chitty Bang Bang At the age of 20 Louise met and married John, but went on to perform in the “King and I” in Drury Lane in 1955-6.
Family life and the arrival of their three sons Matt, Peter and Simon meant an end to professional touring and she concentrated on amateur dramatics, teaching dance and bringing up her children. Husband John, an advertising executive, set up a roofing business in the West Country and for several years commuted between their home in Hazelmere and his office in Exeter. During this period Louise, with a friend, set up a successful theatrical costume hire business called Haslemere Wardrobes in Surrey, which is still going today.
In 1981 they moved to a house with a lovely garden in Over Stowey where her love of gardening flourished, helped no doubt by a 3-year course in decorative horticulture at the then Somerset College of Agriculture and Horticulture in Cannington.
For a time they lived in North Petherton before moving to Crossways Farmhouse in Combwich. Sadly

John died in 2015 following which Louise moved to her current address in Kiln Close.
Louise still enjoys gardening and painting and is a regular volunteer at the Friday Coffee Club.